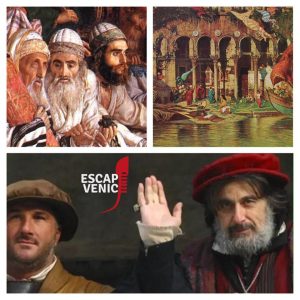 You will think: “Are you vanishing? Trade okay, but the rest?” In truth, in the past Venice, due to the innate commercial spirit of its citizens, has had the ability to bring together in mutual tolerance many representatives of different peoples and cults (Jewish, Turkish, Armic and of different origins), considering them a source of enrichment of its economic, political and cultural heritage. The “strangers” were welcomed regardless of their social class and religious beliefs and took an active part in the life of the city at various levels. Strange, isn’t it? Yes, it sounds strange when we think of modern history.

International trade was the heart of the economic life of Venice and in the city the languages and dialects of the world were heard. Many peoples lived (not only passed through) here. Venice was practically the New York of the 16th century and Rialto was Wall Street. Like modern New York, Venice had the neighborhoods of different peoples: the Jewish ghetto, the Turkish casket, the island of the Armenians, etc. …

Some buildings, called “fondachi” (from Arabic funduq “house-warehouse”) were reserved for the goods and accommodation of foreign merchants. On August 16, 1575, at the request of the Turks, the Venetian Senate decreed to identify a space reserved for them, such as that of the Jews and Germans. In addition, a bazaar and, according to Turkish traditions, a small mosque and Turkish baths were built.

And that’s not all! Venice was the editorial capital, it made the world read. Thanks to the genius of Aldo Manuzio, books were printed in many languages. For several decades Venice became the capital of Jewish publishing: the first Rabbinical Bible (1517) and the first Talmud (1524-25) were printed there, and throughout the seventeenth century the multilingual Haggadot (ritual books for Pesach) printed in Venice went around Europe. And then, if Shakespeare set “The Merchant of Venice” and the events of Bassanio and Shylock in Venice and not elsewhere, there was a reason to be there.

And do you know that the first Koran was also printed in Venice? In 1537-1538 the Paganini, who had seen the business of selling the book in thousands of copies to the Arabs present in the city and beyond, printed for the first time the Koran. The book was believed lost forever and was found only 30 years ago in St. Michael’s island. The book contains many legends and I will tell you about them 😎 in a future post. 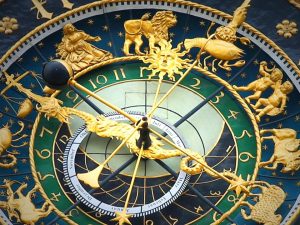 The Rainieri were a famous family of watchmakers from Reggio Emilia. When in 1493 the Venetian Seignory decided to replace the old hammerhead clock in the north-west corner of the Marcian basilica, the Rainieri set to work, building a masterpiece of technique and engineering still working. It is said that, as a reward for his excellent work, he had been ordered to blind his father and son Rainieri so that they would never be able to replicate the work elsewhere. 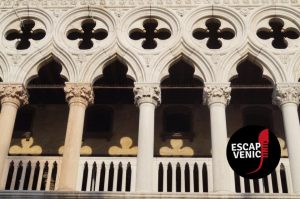 The two pink columns of the Doge’s Palace and the false hope of the fourth column.
Looking at the columns of the first loggia of the Doge’s Palace, you can easily identify two of different colors where tradition has it that the capital remains were read. It is said, however, that one last hope was offered to the condemned: on the side of the building that overlooks the laguna there is still a column (the fourth starting from the corner) that appears slightly out of alignment with the others. Anyone who could walk around the column without falling off the base could have obtained grace. It seems easy, but even resting your back on the column and trying to crawl on its circumference, there is always a critical point where you lose your balance. Try it to believe it! 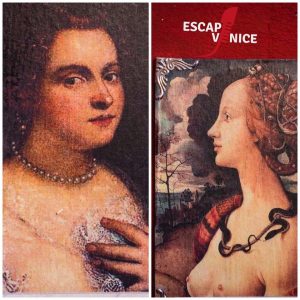 To be a courtesan in the 16th century in Venice meant avoiding the alternative of marrying or going to the nun: at that time both could be two cages!
It was not the Venice of the eighteenth century, libertine and devoid of inhibitions. The city of two centuries before, however, had a double morality and women of good reputation were virtually segregated. A husband’s girl went out of the house to go to mass. She came out veiled so that you could not see her face and accompanied by males at home (does she remind you of something? Does she not remind you of current themes?). And even when they’re married, “the gentlemen plug their women into their homes like chickens in the bush,” wrote Croyat. So don’t be fooled if you see the paintings of that time with women showing dizzying necklines, that was just fashion. But, apart from the family customs, the Venice of the Serenissima was a Republic with wide views and did not hinder the courtesans, on the contrary.
To be a courtesan meant first of all to be able to dispose freely of oneself, one’s body and one’s time, to read and study, all things that were denied even to the highest ranking ladies. The Venetian women’s universe was divided into two parts: on the one hand, the women closed in the house or monastery, and on the other, those who had visibility and a greater dose of freedom, namely the courtesans. The wealthy men loved to be with the courtesans, not only for their amatory qualities but also because the courtesans, who were educated women, knew more languages and played musical instruments were therefore a pleasant company… but this is another story that I will tell you at the next post

😉. I don’t know you, but the courtesans are really nice to me!! 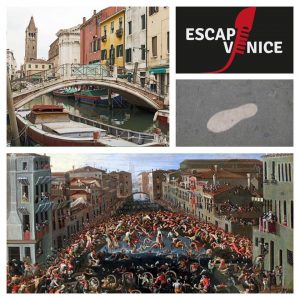 The name of the Bridge of Fists is linked to an ancient tradition of Venice, the Fist War. The inhabitants of two opposing factions, the Castellani of S. Pietro di Castello and the Nicolotti of S. Nicoló dei Mendicoli, clashed “punches” on the upper part of the bridge. Until the 18th century the bridges had no parapets, so the aim of the fight was to throw the opponent into the canal.
The team who managed to keep his men on the bridge won. The authorities did not oppose the battle, on the contrary. About 300 challengers from each faction gathered at the foot of the bridge to fight with sticks but especially fists! The curious were many and they looked out the windows or watched from boats.