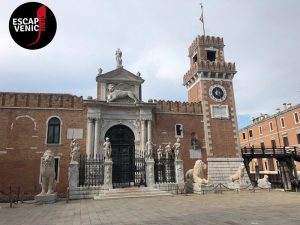 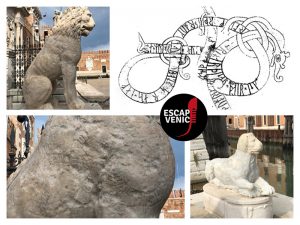 THE ARSENAL OF VENICE AND THE LEGEND OF THE LIONS

The Venice Arsenal was a fundamental place for the life of the city. It was a real city in the city. It was the place that allowed Venice to dominate the seas militarily and commercially. At the military entrance to the Arsenal there are 4 lions (not one!) to symbolize the importance of the place.  Such a place is rich in legends. One of them tells the story of the lions guarding the entrance.
The biggest lions are spoils of war and come from Athens and carry engraved runic inscriptions. One of the two youngest came from Delos, in memory of Corfu’s victory in 1718.
Legend is full of magic! The protagonists are a magician, a hero and lions… if you’re ready to listen, you’ll hear the story.
Legend has it that in November 1719, after a storm that had lasted a couple of days, the horribly torn bodies of two sailors, one Greek and the other Maltese, were found right next to the Arsenal portal… they seemed to have been torn apart by a beast.
The authorities tried to know if by any chance some beast had escaped from some menagerie, but nothing. People were afraid and they started talking about magic, the lions of the Arsenal, the place. The surveillance of the area was entrusted to the Navy (which still supervises the area) and Captain Enrico Giustinian.
After about a week another stormy night, and a new body horribly torn apart, that of such Jacopo Zanchi, a sort of perdiday, unreliable person like his wife, prostitute for lost time.
All the victims lived not far from the place where they were found, and this other event increased terror among the local residents.
One day Captain Enrico Giustinian saw a scene in the street between Zanchi’s widow and an old merchant with a reputation for usurer, called Foscaro. The widow was insulting the usurer who sibilated to her “We’ll see where your boldness ends on the next stormy night”.
On the next stormy night Captain Giustinian hid near the entrance to the Arsenal and waited to be guarded by his sword. The hours passed and finally, between midnight and one o’clock, always under the pouring rain and the wind, an arch of fire arrived from the nearby houses and literally materialized the old Foscaro near the greatest lions. He revolved around one of them, touching the runic inscription with his fingers and at the same time pronouncing its meaning in this mysterious language. At that moment a luminous globe was formed on the portal and a first lightning struck the seated lion that slowly took life, huge and fierce.
Just at that moment Zanchi’s widow, accompanied by a friend, turned the corner of the shore and, while a second globe with a second lightning struck the other lion, the first was already fiercely resetting one of the two women.
The old usurer watched the scene, impassively, continuing to pronounce mysterious words and touching the runes. Shaken by terror and magic sings, the Captain splashed the sword and struck the old man in his chest, just as a third lightning struck the third lion.
With a frightening roar and blinding flash of lightning everything returned instantly as before: the lions in their place, motionless, the friend of the widow, mortar crumbled immersed in her blood. Of the old man remained only a heart of stone next to the sword that had fallen on the chews.
The head of the third lion was still alive, and roaring and moving desperately anchored as it was to a body of stone, so the Giustinian beheaded him. The head did not fall down but exploded literally, spreading around a blackish substance.
Subsequent investigations showed that the old man was a sorcerer and had been cheated by Zanchi, so he wanted to take revenge. The widow was locked up in the asylum, because she had gone mad, and the head of the third lion was replaced, as can still be seen today.
Legend perhaps is linked to some element of truth in fact if you go to the arsenal observe the great lion on the left of the entrance, and look for the runes, they are still there. Then go and see the third lion, towards the canal… the head is of a different colour!
True or not true this legend is still suggestive and the mystery is still imbued in this fantastic place, rich in ancient elements and perhaps (for those who believe) magical.
This is Venice rich in mystery and magic in many corners of the city. His legends can see, touch and perhaps, closing their eyes, relive in a sort of journey through space and time! 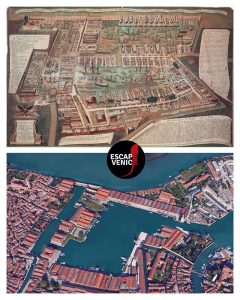 The Venice Arsenal was the beating heart of the Serenissima Republic, which based its successes on naval power and trade.  The ships were built at Castello, in the Arsenale, completely surrounded by high walls so that no one could spy on the inside. The name “Arsenale”, differently from what one might think, derives from “arsene” which were the squerias where the boats were built.
Think that the surface of the Arsenal was, and is, about a tenth of that of the city of Venice because in addition to the Arsenal there were also squerias scattered in the city (one of these, the first and most important, was the Royal Gardens); from this you can understand the importance that was given to the construction of ships.
Imagine for a moment to go back to the age of the Serenissima, at the end of 1500, and to stroll along the banks of the Schiavoni. The shore was overcrowded with people because it was the embarkation for the mythical East, for the way of the silk; the channel of exit of the Arsenal was a continuous rumor of the sailors and the ships that went out ready to set sail, new of mint, many for commerce but also for facing the enemy… that then was constituted by the Turks. Think that at the time of the Battle of Lepanto even twenty galleys a day could be armed! Imagine that bustle! It is said that three thousand eight hundred men worked on it when it was up and running in eighty open worksites!!! This is also an indescribable image.
The Arsenal was completely autonomous: in addition to the ships, sails, elbows and everything that could be used to arm them were created. Think of the cheesecloth of cutters, squaders, brick makers, tinsmiths, blacksmiths, smelters, bricklayers, firemen, carpenters, caulkers and rope makers. The hustle and bustle of gunsmiths, axe masters, sail weavers and hemp spinners, warehouses, bakers for the production of the “biscuit”.  Inside the arsenal there were huge ovens to feed not only the workers but also to load the pantries on the ships ready to go. A city within the city, all trades were present.
Imagine now walking into the pavilions (still open today entering from the basins or the biennial) where they assembled galleys, transport galleys… imagine the effort of men to load the cannons, the smell of wood, pitch, sweat of men.
The Venice Arsenal was the pulse of the city, without it Venice would not have become an empire. The Arsenal gave work not only in Venice but also in the whole territory on the mainland. Think of the wood that was used to build the ships! It arrived in the lagoon by water. Logs of beech, fir, oak, larch dragged by boatmen since Cadore, Cansiglio, Montello but, it is said, also from Istria and Dalmatia.
Think about the organization behind it, the minds that handled these huge amounts of material; think about the media of the time (there was no Internet, no computers, no mobile phones to order). Incredible management skills! All obviously managed with strict discipline because the Serenissima could not allow the machine to get jammed.  You could not afford to steal: thieves were cut off hands, burned an eye to those who did not guard properly, hanged cheaters. Everything was recorded and written in the tombstones on the walls of the building site with date, crime and sentence… as a warning. Hard methods that are horrifying today. But the machine had to work.
The place is worth visiting and, thanks to recent restoration work, including the Arsenal Tower, is also very well preserved. The current “Great Dock” was once divided into two smaller docks (as shown in the picture) to have more space to build the galleys.
Access to the dock is not so easy and direct: you enter either from the Biennale by visiting it, or from the Bacini stop by trying to enter from the public gate where there is a bar and a small photo exhibition on the history of the Arsenal.
Impressiveness and size are still incredible today.

In the world the barbacan (or barbican) is a medieval defensive structure, which served as a work of support, reinforcement or additional protection to the boundary wall or the actual fortress. The Venetians, travellers, observed and brought these inventions to the city, revisiting them. And from this comes the genius! These support structures were intelligently reinvented for the Venetian houses, but not as defensive works but to enlarge the living spaces without restricting the narrow streets that were already narrow in themselves.

The barbacans are in particular beams, made of wood or stone, which emerge on the first floor from the facade of the building. In this way, the first floor and all the upper floors have a larger usable area than that available on the ground floor.

At the same time, the barbacans provide weather protection for pedestrians and for commercial activities on the ground floor. Ingenious!

The Republic of Venice established a maximum limit for the width of the barbacans. There were essentially two reasons for this. The first was to avoid that the distance between two buildings facing each other was too small because otherwise it favoured the spread of fires, which were very frequent at the time. The second reason was to ensure sufficient brightness and wholesomeness in the case of the narrowest alleys, while avoiding blocking the arrival of sunlight. To this end, in the Rialto area, precisely in Calle della Madonna, a “barbican sample” in Istrian stone was made, still visible today, bearing the inscription “PER LA IVRIDICIOM DI BARBACANI” (FOR THE IVRIDICIOM OF BARBACANI). This sample barbican defined the maximum permitted projection size for this type of structure.

Examples of barbacans can also be seen in Treviso and even in Bologna … the idea has been copied but the Venetian examples are unique in quantity, quality and architectural features!

The photo that follows depicting the stone used in Venice as a sample is taken from the page http://www.venessia.com/curiosita.htm 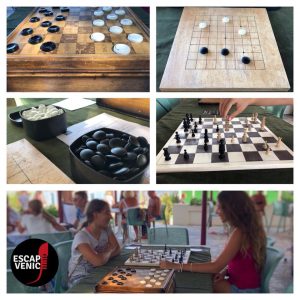 Want to play chess, checkers and go together with us on the seashore?
We wait for you on Sunday from 14.00 to 16.00 at the beach bar 4 Fontane at the Lido of Venice.
For Escape Venice ASD members the cost is only 5€ for the whole period until the end of August.
Not a member? No problem! You will register on site with only 5€ / year and you can also access the escape room as a member of the “Merchant of Venice”.
Play with us, train your mind! 😎
Information info@escapevenice.it
www.escapevenice.it