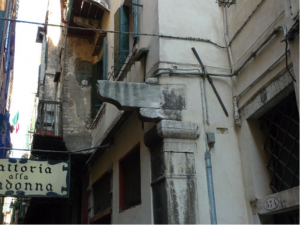 In the world the barbacan (or barbican) is a medieval defensive structure, which served as a work of support, reinforcement or additional protection to the boundary wall or the actual fortress. The Venetians, travellers, observed and brought these inventions to the city, revisiting them. And from this comes the genius! These support structures were intelligently reinvented for the Venetian houses, but not as defensive works but to enlarge the living spaces without restricting the narrow streets that were already narrow in themselves.

The barbacans are in particular beams, made of wood or stone, which emerge on the first floor from the facade of the building. In this way, the first floor and all the upper floors have a larger usable area than that available on the ground floor.

At the same time, the barbacans provide weather protection for pedestrians and for commercial activities on the ground floor. Ingenious!

The Republic of Venice established a maximum limit for the width of the barbacans. There were essentially two reasons for this. The first was to avoid that the distance between two buildings facing each other was too small because otherwise it favoured the spread of fires, which were very frequent at the time. The second reason was to ensure sufficient brightness and wholesomeness in the case of the narrowest alleys, while avoiding blocking the arrival of sunlight. To this end, in the Rialto area, precisely in Calle della Madonna, a “barbican sample” in Istrian stone was made, still visible today, bearing the inscription “PER LA IVRIDICIOM DI BARBACANI” (FOR THE IVRIDICIOM OF BARBACANI). This sample barbican defined the maximum permitted projection size for this type of structure.

Examples of barbacans can also be seen in Treviso and even in Bologna … the idea has been copied but the Venetian examples are unique in quantity, quality and architectural features!

The photo that follows depicting the stone used in Venice as a sample is taken from the page http://www.venessia.com/curiosita.htm