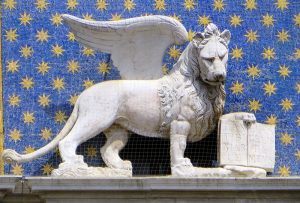 The Lion of St. Mark: legend and symbol of Venice… but why the Lion?

The Lion of St. Mark, the famous winged Lion, is for everyone the symbol of Venice.

The link between St. Mark and Venice comes from an ancient legend, according to which the Evangelist Mark, during his journey from Aquileia to Rome, found a storm and he took refugee in a small island of the lagoon. Here an angel appeared and said to him: “Pax tibi Marce, evangelista meus, hic requiescat corpus tuum” (Peace to you Mark, my Evangelist, rest your body here). It was a prophecy! Many years later, Venice will be in fact the place of rest after his death. After the prophecy, St. Mark continued his journey and he finally died probably in Alexandria, Egypt.

During the Serenissima, the Doges aimed to have the greatest number of relics in the city, because they brought prestige and… numerous pilgrims. Since ancient times, the Coptic community of Alexandria claimed to keep the relics of St. Mark. This fact had not left indifferent the Doges in Venice, who aimed to have in the city even one of the four evangelists. They organized a secret mission in 828 A.D. and two venetian merchants went to Alexandria to stole the Saint’s remains and transport them to Venice. On board there were a Greek monk (Staracius) and two Venetian tribunes (Rustico da Torcello and Bono da Malamocco). They managed to pass the customs control hiding the relics under a load of vegetables and pork, which the Muslims refused to touch because considered impure.

Once in Venice, the two tribunes hid the relics in the Basilica, where they were found only in 1094, on 25 June. St. Mark became the symbol and patron saint of the city, and the Basilica assumed great value as the guardian of the remains of one of the four Evangelists.

Why the symbol of Lion?

Only from about 1260 the Lion of St. Mark, in the form of a winged Lion, begins to represent St. Mark and the Serenissima Republic. Why a winged Lion? Here are several versions:

Therefore, the reason for the choice of the Lion symbol is not certain. Perhaps all the above reasons are right. The fact is, that the winged Lion took on a political meaning for Venice in addition to the religious one: the Lion symbolizes the strength, the wings the spiritual elevation and the freedom. But it is not only a symbol of majesty and power, but also of wisdom and peace due to the book on its paws (in the open book you can read the words of the prophecy of the Angel to St. Mark). Finally, the sword symbolizes justice. All characteristics that the Serenissima Republic felt as its own.

Different ways to represent the Lion of St. Mark

The image of the Lion of St. Mark is present in severals ways; the best known are the “Andante” and the “Moléca”.

– In Andante the body of the Lion is seen in full, in profile, and the right front leg rests on the book and the snout forward. The wings, usually parallel, may have the feathers well distinct or compact; the tail is more frequently at rest but also raised. The raised tail probably indicated a military victory. In some paintings two legs rest on the ground and two on the sea, indicating the possessions of the Venetian Republic.

– In Moléca the lion is represented frontally and squatted, almost assuming the shape of a crab. The word Moéca, in venetian, indicates the crab. According to some, not only did the shape remember it, but also the fact that in some representations the Lion came out of the water, just like a crab. The circular shape was ideal to be inserted in coats of arms and round reliefs.

Finally, a curiosity: Lions have always fascinated Venetians and, in addition to filling the city with marble symbols (see Legend of Arsenal Lions), also many living Lions were kept in patrician gardens. It seems that around 1300 a Lioness even gave birth at the Doge’s Palace.

San Marco is celebrated on April 25th… and for Venetians it is the Feast of the Bòcolo (Red Rose).

See also the beautiful video that follows on the winged lion in St. Mark’s Square by Daniele Zoico – DANTO Production