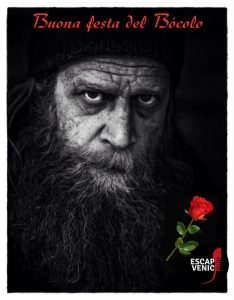 The century-old tradition of Venice that on 25 April, on the day dedicated to St Mark, girlfriends and wives will be offered a rose bud (in Veneto bócoło) of red rose, as a sign of love.
The custom was born from the legend of Maria, daughter of the Doge Angelo Partecipazio, who fell in love with the young Tancredi. The feelings of the two young men were opposed by Mary’s father, who would not allow such a marriage. Mary then asked Tancredi to go and fight against the Arabs in Spain with Charlemagne’s army, to gain fame: his father could no longer oppose their love. Tancredi left and covered himself with glory in war. One sad day some French knights arrived in Venice, who had been led by the paladin Orlando. The knights looked for Mary to announce the death of Tancredi: struck by the enemy, he had fallen bleeding over a rose bush. Before he spired, he had picked a flower and asked his friend Orlando to take it to Venice to his beloved Maria. Mary took the pink still tinted with the blood of her Tancredi. The next day, St Mark’s Day, she was found dead with the bloody flower on her heart.