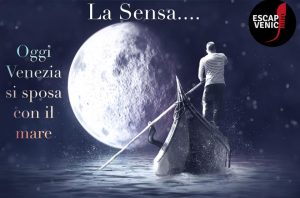 The Feast of the Sensa has ancient origins. It was established around the year 1000 to commemorate the conquest of Dalmatia by Doge Pietro Orseolo II and was chosen the day of the Ascension (called “Sensa”) being the same in which the Doge left with his expedition. The festival represents the Marriage of Venice to the Sea and symbolized the maritime domination of Venice, which on this occasion also freed the Adriatic Sea from piracy. It was decided that every year, on the day of the Sensa, the Doge and the Patriarch would bless the water off the Port of Lido and from 1177 the traditional ceremony began in which the Bucintoro, the representative ship, the Doge, accompanied by ambassadors, clergy, heads of the Council of Ten and other authorities, let a golden ring fall into the water and made the sea marry in Venice “as a sign of eternal domination”. The ceremony was wonderful, surrounded by boats of all types and sizes prepared for the occasion. After the ceremony followed shows, acrobats, storytellers throughout Venice.
The city’s bond with the sea is still alive today. The life of the city itself is regulated by tides and canals are the living arteries of this unique city!