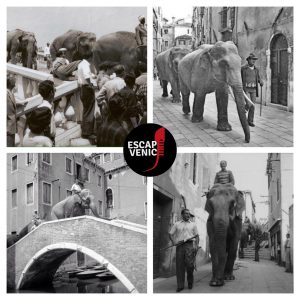 It was July 26, 1954. The Togni Circus brought elephants to Venice.
But how to get the pachyderms to a suitable place without endangering the stability of the bridges?
S. Polo camp was chosen. They arrived by train, then made the “Ponte degli Scalzi” (litterally “Bridge of the Barefoot”) raising the proboscis in parade and then off to S. Giacomo dell’Orio.
On this Venetian “adventure” of the past there is also a movie (http://www.youtube.com/watch?v=6MEwe6XL_ck), shot in 8 mm by Prof. Alviano Boaga, that I recommend you to see and watch what happens in the 2:45 minute!!!
Images unthinkable nowadays in many ways but then… it was magic.
Images speak for themselves. 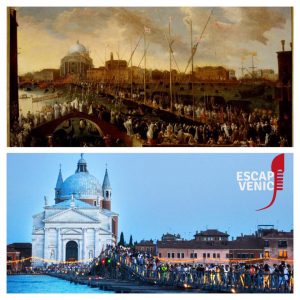 Every year, on the third Sunday of July, comes the feast of the Redeemer, which celebrates the liberation of Venice from the plague. It’s the feast that we Venetians feel as ours, that the boys are waiting for. We all organize ourselves with tables, decorated boats, parties, rooftops, lights. For one day Venice is again ALIVE!

It was 1576 and for a year the plague had been decimating the Venetian population without rest. The Senate of the Republic, driven by popular discontent, decided to resort to God, and on September 4 it was decided that if the city was saved from the plague, a new church would be erected and dedicated to the Redeemer. It seems that only after a few weeks did the plague disappear. Two senators were therefore immediately elected with the task of finding the place where to begin the construction of the basilica dedicated to the Redeemer. Three possible places were initially indicated: Campo S. Giacomo dell’Orio – Campo S. Vitale – Isola della Giudecca.

On 22 November 1576 it was decided that the island of Giudecca was the most suitable site for the erection of the votive temple, where the Capuchin friars had the small church of S. Maria degli Angeli and the church was commissioned to Palladio.

It is said that two years later, the basilica was still under construction but, since the Doge with the Lordship and the clergy and schools had to go to the Giudecca for a vote, a bridge of boats was built to allow the people to go there in procession. The judging channel was in fact too wide and the faithful should have crossed it with individual boats. The votive bridge boats was built with boats to allow a great influx of people and since then, after almost 500 years…it is still like that!