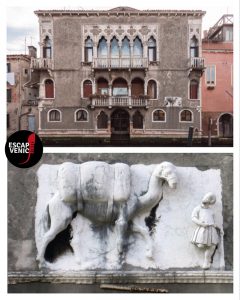 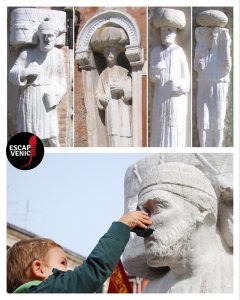 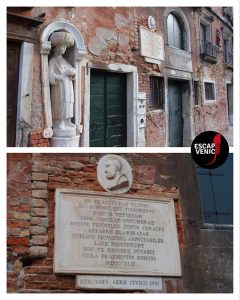 THE “HOUSE OF THE CAMEL”: A PALACE FULL OF LEGENDS

In Campo dei Mori 3381 (fondamenta Gasparo Contarini, sestiere di Cannareggio) there is a unique building, Palazzo Mastelli, which has a high relief of a camel on its façade. Well, don’t you think it’s strange to have a camel in Venice with a cameleer?
Campo dei Mori is one of the most fascinating, mysterious and little known parts of the city, away from the hordes of tourists. The Palace was owned by three brothers Rioba, Sandi and Afani, who came from Morea in the Peloponnese from here the “Moors” then called Mastelli and traded spices and silks. It is fairy-tale that the name Mastelli derives from a colourful image of their wealth: from the “tubs”, “mastei” full of gold and silver coins that they possessed.
The statues of the 3 brothers and a servant are in Campo dei Mori. The statue with the suitcase on its shoulders is Rioba and the suitcase is perhaps a sign of the wealth that the brothers brought to Venice. The other two brothers have turbans.
The building is very fascinating because it contains many architectural contaminations of cultures that have passed through Venice and have brought and left pieces of their history and art (and we like the contaminations because they bring cultural richness). The palace dates back to the 12th century (probably 1112 A.D.): the upper floor retains mature Gothic forms in the window and corner balcony typical of Venice; the triphor on the first floor is not Gothic and the balcony is Renaissance; part of a Roman altar is the column in the window at the left corner of the first floor; the cornice at the base of the building, in Istrian stone and pink brocatelle from Verona, is adorned with reliefs of leaves and flowers of the Byzantine type and always on the ground floor round arches certainly not Byzantine. And another curiosity (oriental) of the building is the small fountain in Arabic style, located at the base on the right side of the facade, which, until a few years ago, was working. The gondoliers used it to quench their thirst and those who passed over the river with their boats.
Could a palace not have legends? Right in Venice where legends and myths are part of the stones of the city? Impossible. In fact, there are two legends.
The most romantic and least known first… who knows if true.
Legend has it that a rich oriental merchant, having to leave his homeland for Venice (just one of the Mastelli brothers), had a camel and camele maker sculpted on the façade of his new Venetian residence to make it easily recognizable to his beloved, who had not accepted his proposal to marry him: “I therefore leave with a torn heart and try to forget you, but if one day you want to reach me in Venice, you just have to ask where the camel house is located“.
Apparently the promise brid never appeared before the rich merchant’s house. It is not known if she was lost in the Venetian streets or if she found a beautiful man in his homeland.
The second legend is better known and is “The Legend of Rioba” of which I have heard various versions narrated, typical of oral tradition, and I tell you what I like the most.
The three brothers Rioba, Sandi and Afani (those of the statues in the image) were skilled merchants but also scammers and did not refrain from deceiving potential customers for money. According to legend, one day a merchant’s widow went to the three brothers to buy fabrics from them, which were used to continue the work of her husband. The three merchants were looking forward to deceiving such a naive lady, regardless of her misfortune. So they began to praise their very common cotton fabric as the most precious and sumptuous in Venice, justifying in this way its exorbitant price.
It is said that the “Sior Rioba”, addressing the Lady, said “This is the best yarn of Venice, noblewoman, and that the Lord can change us into stone if we do not tell the truth!” At these words the woman, having paid the exorbitant sum requested, before leaving, said: “And I thank you messengers! And so that the Lord may have in your regard the same care and attention that you have had for me“. The widow was very religious and she prayed to Saint Mary Magdalene to throw her curse on the three merchants and for incredible miracle the brothers became three stone statues, which were placed in a niche of Campo dei Mori as a warning to those who saw them.
It is also said that during particularly cold nights the spirit of Sior Rioba trapped in the statue weeps and that the beats of his heart can be felt by those who pure of spirit will lay a hand in his chest.
If you are pure in spirit and if you go on a winter night in the camp of the Moors…try it and maybe you will hear the cries of Rioba.
Despite all the legends, the Mastelli family has really existed. In 1202 the family took part in the Fourth Crusade, which was desired and conducted by Doge Enrico Dandolo. Later they opened a fondaco where they traded spices “All’Insegna del Cammello”, then they moved the seat and the business in the hinterland veneto where they died in 1620, when the last descendant, a certain Antonio Mastelli, died.

BUT IT’S NOT OVER 🙂
Of the four statues, the most famous is that of Rioba, called “Sior Rioba” in Venetian dialect, on which it was customary in the following period to hang tickets and satirical inscriptions against the power of wealthy families during the period of maximum splendour of Venice. Two other statues, called “oracles” in Venice were used to hang satirical tickets: the statue of the Maroco de le pipone (Morocco of the Melons), a seller of melons (this statue is in Piazzetta San Marco), and the statue of the Gobo de Rialto, in San Giacometto.
In 1800 the statue of “Sior Rioba” lost its nose this was replaced with a fairly improvised iron nose and since then it is said that touching his nose brings luck.
In 1848 the Sior Rioba even gave its name to a satirical newspaper “L’ombra de Sior Antonio Rioba” newspaper that contributed to the spread of its popularity.
In the night between April 30 and May 1, 2010 the Sior Rioba was beheaded and immediately mobilized law enforcement agencies and ordinary citizens. Luckily the head was found in Calle della Racchetta on May 3rd and the statue was promptly restored.

BUT IT’S NOT FINISHED YET 🙂
At number 3399 of the foundations of the Moors instead there is the house of Tintoretto, right next to the statue of one of the brothers there is a plaque in memory of Tintoretto who lived here and another relief from the Roman era depicting Hercules. Tintoretto is buried in the nearby church of the Madonna dell’Orto.

How much history in one place!

We use cookies to ensure that we give you the best experience on our website. If you continue to use this site we will assume that you are happy with it.Ok