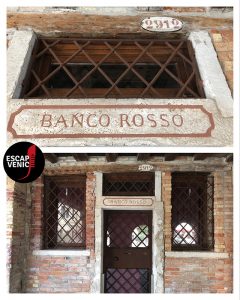 VENICE AND THE JEWS… AND SHYLOCK OF SHAKESPEARE

On the 29th of March 1516, the Senate of the Republic passed a law that had no precedent in the history of the city; the new law allowed Jews to reside in Venice as permanent residents. However there were restrictions. The Jews were only allowed to live in a segregated area. Before the Jews settled there the Venetians called this area the ‘getto’ (in reference to the word for foundry in Venetian) because it had been a place where foundries for the construction of cannons for Venetian ships were located. It is believed that the first Jews from Northern Europe and of Ashkenazi origin coined the term ‘ghetto’ because they pronounced ‘getto’ with a strong ‘h’. Thus the first ghetto in history was formed.

In Venice, a city of commerce, it was necessary to be able to borrow money.
Initially the Christians of the Monti di Carità  carried out this activity, but soon the loaning of money was considered contrary to the Christian dictates and thus the Monti di Carità was closed. And it is for this reason that the Republic officially allowed the Jews to do the necessary job of lending money. However history tells us that the Jews were, in fact, already money lenders in the fourteenth century.  So the Venetian Republic legislated an activity that was already in practice. The new law established that the loaning of money would be allowed with taxes and rates fixed by the Republic.
This money lending activity was carried out above or around three pawnshops in the Campo del Ghetto. These three stalls, which survived until the end of the republic in 1797, were identified by red, green and black signs. Until recently, it was possible to visit the restored Banco Rosso. However, it is now closed to the public. The Banco Rosso is considered to be one of the first Jewish pawnshops in the world. The name of the bank comes from the red receipt that customers received when they left an object at the shop in exchange for some money.  It is thought that the banking term ‘in the red’ comes from this ancient Venetian pawnshop.
The theme of our Venice escape room is the famous comedy ‘The Merchant of Venice’ by William Shakespeare. In this story, the Jews are seen as usurers full of money and greed. In reality, they were usurers because the Church and the laws of the countries in which the Jews resided attributed this trade only to them.
Sources: “Maybe Not Everyone Knows That… in Venice” by Alberto Toso Fei.