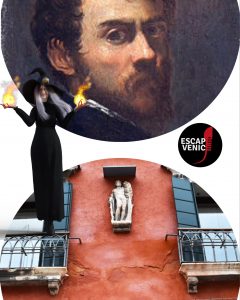 It’s Halloween time so we looked for a Venetian legend about witches to tell you. Of the many, we particularly like one because it’s about Tintoretto, whose 500th anniversary is celebrated in 2018! So we elected this legend as the Venetian Halloween legend for 2018! We left it practically the same as the source, so beautiful it is. From: “Alberto Toso Fei: Tintoretto and the witch, in a dark legend the black magic appears in Venice”. Enjoy reading!

The time came for Marietta, the eldest daughter of the painter Jacopo Tintoretto, to take her first communion. As you know, Tintoretto’s house at 3399 of Fondamenta dei Mori was close to the convent of Madonna dell’Orto (and to one of the statues of the Rioba brothers, see also photos in https://www.escapevenice.it/it/2018/09/04/la-casa-del-cammello/). The children went to the convent for ten days before communion to receive the Eucharist. So it was that on the first morning Marietta met an old woman who asked her where she was going. “To make communion,” she replied. “Say, do you want to be like Our Lady?”, pressed the woman. “Oh, but that’s impossible,” replied the little one. “No, if you do as I say. Instead of taking communion, keep the particle in your mouth. Then hide it at home in a safe place. When you have ten, I’ll come back, and you’ll see what a nice surprise. For a few days the child did as the woman had told her. For fear of someone finding the particles, she hid them in a box in the garden of her house. The hiding place was near the small shelter where the father, as was the custom at the time, kept a pair of pigs and a donkey. Five or six wafers, one morning the beasts knelt in front of the drinking trough. They didn’t want to get up, not even with a stick.
So it was that the child confessed in tears. Tintoretto, for the work he did – though a man of faith – was aware of some practices related to the Kabbalah and magic. He knew well that with that method the old witches “recruited” more young people by deception. He decided not to speak of it with anyone. On the morning of the tenth day, the painter instructed her daughter. When she returned home she would let the old woman up. The witch did not delay, and Marietta went to open them. But she did not have time to cross the threshold of the hall on the upper floor that the artist had already attacked her with a knotty stick. After the first woods, the woman was happy to turn into a cat. In this form she began to run and climb along the walls, on the furniture, on the curtains. At the end, having seen itself lost, she launched a very sharp cry. The witch wrapped in a black cloud hurled herself so violently against the wall that she came out of it leaving a hole in the wall. No one ever saw it again. But Tintoretto, so that she could not in any way return from where she had fled, had a relief of Hercules with a club walled to guard the walls of the house, where it is still visible today.